The Best Day of the Year to Buy a Home

If you’ve ever bought a home, you’ve likely heard from your Realtor that it’s better to buy in the fall and winter months to get the best deal — given less competition from other buyers in these colder months when families are entrenched in the back-to-school schedule.

RealtyTrac took a big data approach to checking the validity such conventional wisdom, and we did find the data to be in agreement — with a few glaring exceptions.

The best month to buy is October

RealtyTrac analyzed more than 32 million sales of single family homes and condos since 2000, and we found that the month where buyers have gotten the best deal on average is October. Of the 2.7 million sales closed in October over the last 15 years, the average sales price was 2.6 percent below the average estimated full market value at the time of sale. 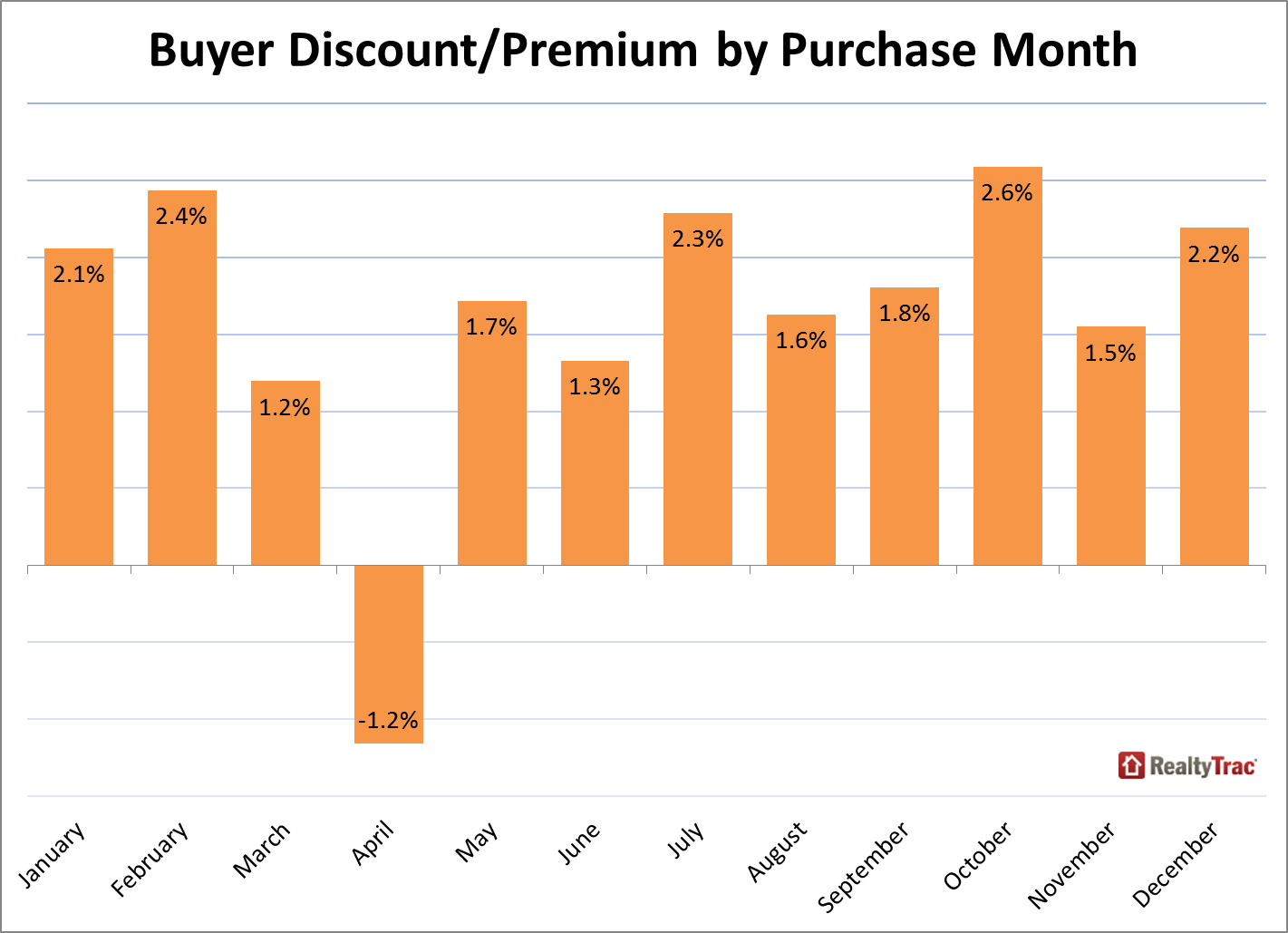 “The start of the school year and the holidays influence our buyer decisions and serve as a strategic indicator of the most advantageous times for buyers to land their lowest-priced deal.  Due to less buyer competition, October and November typically provide a dip in the SoCal real estate activity cycle,” said Mark Hughes, chief operating officer with First Team Real Estate, covering the Southern California market where the best day to buy at a discount is October 1st.

Following October as best months to buy were February, July, December and January — all fall or winter months except for July, which was a surprise given that conventional wisdom would suggest that is a good time to sell but not necessarily to buy to buy at a bargain price. 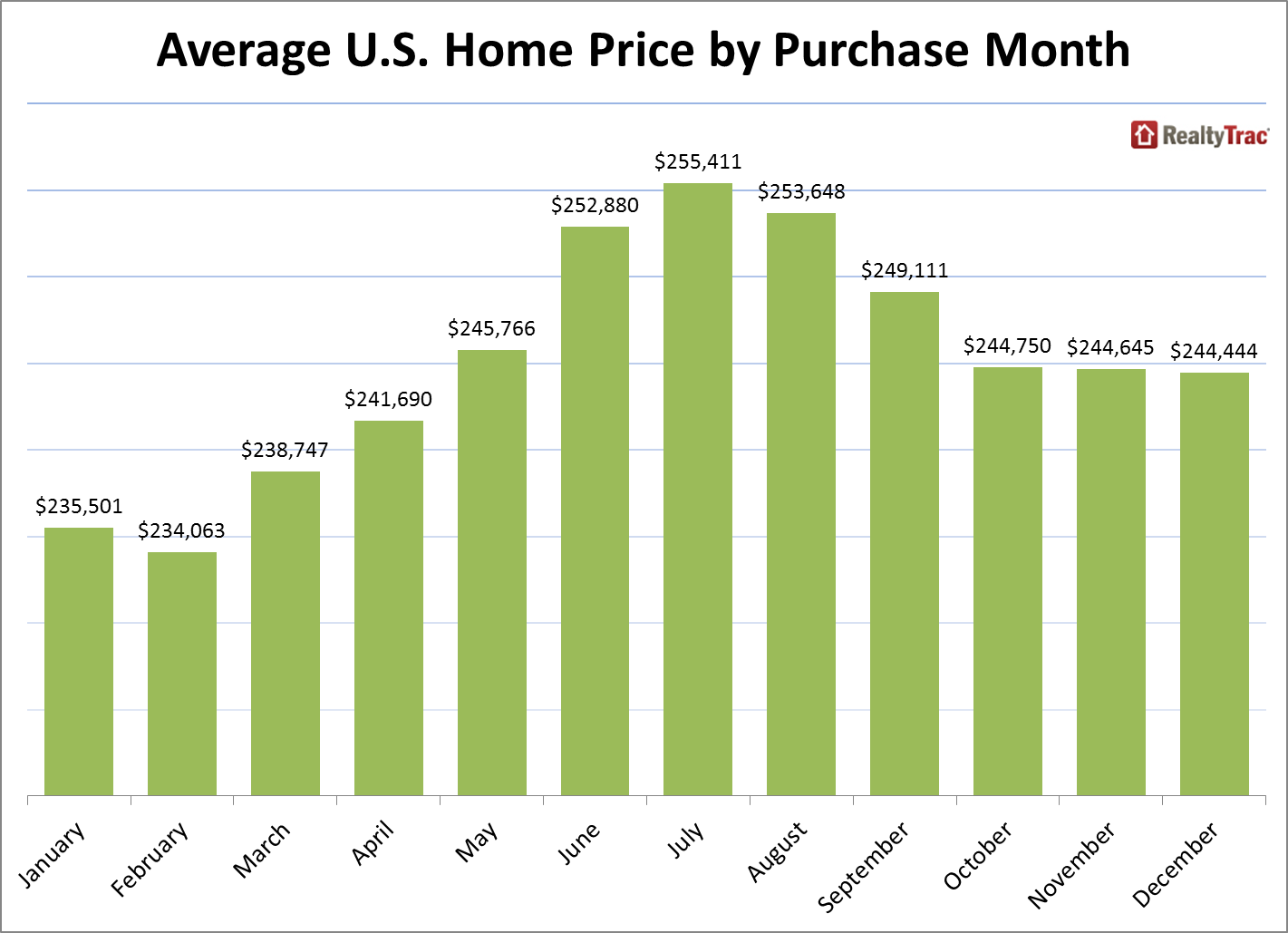 “As we enter the rainy winter months in Seattle, things usually start to slow down. But it’s not just inclement weather; the days also get significantly shorter, making it challenging for sellers to present their homes in the best possible light,” said OB Jacobi, president of Windermere Real Estate, covering the Seattle market where the best day to buy at a discount is April 1st.  “We often advise our sellers to take their homes off the market until spring. On the flip side, we tell our buyers that this can be a very opportune time for them because sellers, who keep their homes on the market through the holidays, are often very motivated to sell. There are also typically fewer buyers in the marketplace, so there is less competition for homes.”

The worst month of the year to close on the purchase of a home is April, when buyers over the last 15 years have purchased at an average premium of 1.2 percent above estimated market value at the time of sale. On the other hand, that makes April the best month for sellers.

The best weekday to buy is Monday

Out of 5.5 million single family home and condo sales over the last 15 years that closed on a Monday, buyers realized an average discount of 2.3 percent below full estimated market value at the time of sale.

Friday is the second-best weekday to close on a home purchase. Buyers who closed on Friday realized an average discount of 2.0 percent. 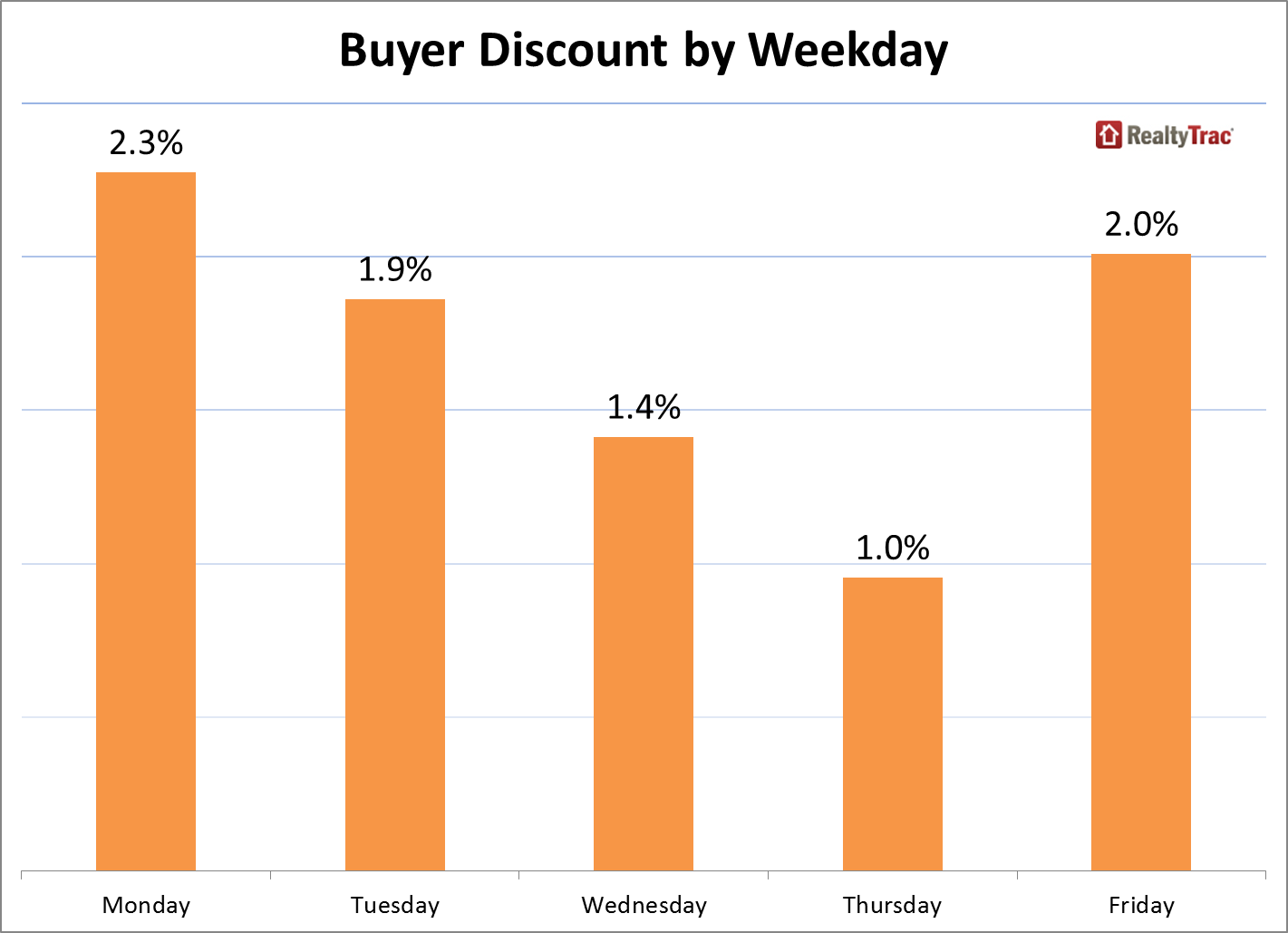 The best day of the year to buy is Oct. 8

While analyzing the monthly data, we also decided to take a look at the data by day of the year. We removed all days with fewer than 50,000 sales over the last 15 years (the average among all days was 88,501), which took out 10 days, including New Year’s Day, Veteran’s Day, July 4, December 24, 25 and 26 and Leap Day, which has fewer sales because it only occurs once every four years.

“Our market will soften up a little due to typical seasonality. Many buyers who may have spent the past six months competing and coming up short may be rewarded in the fall and winter months as more inventory should provide them with more choices and hopefully less competition,” said Anthony Rael, Realtor at RE/MAX Alliance, covering the Denver market in Colorado where the best day to by at a discount is October 21st. “Unfortunately, the degree to which it will open up is dependent upon the market price point. Below $350,000 will remain very competitive and in many cases continue selling above list price, but the real opportunities seem to be in the middle of the market in the $400,000 to $600,000 range.”

“The end of the school year and summer break accelerates our South Florida closings in the spring and summer months,” said Mike Pappas, CEO and president of the Keyes Company covering the South Florida market where the best day to buy at a discount is December 31st. “Historically, we close 60 percent of our sales in the second and third quarter of each year.  Traffic is lower during the holidays and therefore January and February are our lowest closing months.” 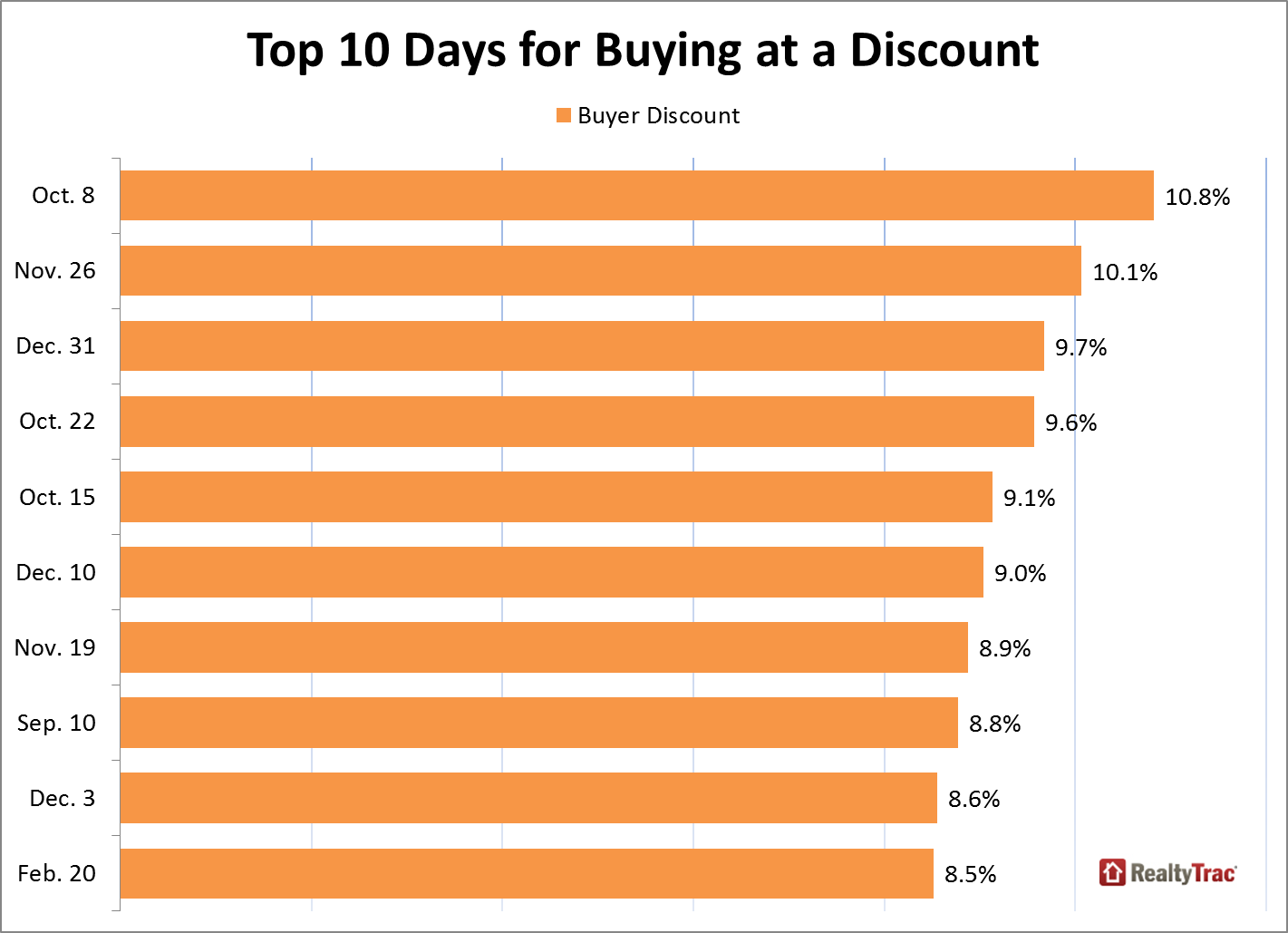 In 2015, the threat of rising interest rates could be another good reason to buy in the fall, according to Michael Mahon, president at HER Realtors, covering the Cincinnati, Dayton and Columbus markets in Ohio where the best days to buy at a discount were December 31st, January 22nd and February 23rd respectively.

“The time to purchase or sell is before the end of the year, in order to take advantage of current market conditions in Ohio. With interest rates likely to rise in 2016, potentially lessening the purchase power of consumers, buyers are finding the ability to purchase more home for their money in today’s housing market,” he said. “Sellers are equally benefiting in the current market, with inventory in the area down 20 percent from last year, contributing to greater demand and higher equity return.”

The sports assist to buyers

Colder weather and the school schedule may not provide a complete explanation for why buyers face less competition in the fall and winter. October, which accounts for three of the top five days to buy at a bargain price, is right in the middle of the pack when it comes to average temperature compared to other months. The average temperature in October among all counties nationwide is 56 degrees, sixth highest among all months, according to data from the Environmental Protection Agency.

Meanwhile we noticed that the best days to buy at a bargain price also align somewhat with professional sports schedules. October is the only month where all four major professional sports are in season or at least pre-season, and early February, which accounts for two of the five lowest-priced days to buy, is Super Bowl time.

Whatever the reason, RealtyTrac’s big real estate analysis of home sales shows there are definitely better days and months than others to buy a home if you’re looking for a big discount or a bargain basement price. All five of the top five days to buy are coming up in the next three months, so it might be a good time to start your home search now if you are considering buying a home in the near future.

On the other, hand, if you’re thinking about selling your home, you may want to consider waiting until April to get the best price for your property.

“Historically, winter months are slower and often a more advantageous time for buyers.  Data doesn’t lie and pinpointing these markets on the best days to buy or sell, could be a great guide for people.  Sellers are motivated in October because many do not want their homes on the market for the Holiday Season,” said Craig King, COO at Chase International brokerage, covering the Lake Tahoe and Reno, Nevada, markets where the best day to buy is November 25th. “One thing is certain in our market place.  With the influx of new jobs and new people coming into the market place, the sooner someone purchases a home, the better value they are going to get.  Supply and demand metrics will be in place over the next few years.  With the invasion of new workers for Tesla, Switch and other companies, and the fact that builders are not constructing enough inventory, there will be severe pressure on building prices as inventory will be very low.”

The interactive visual below allows you to see the best day to buy in major markets with a population of at least 500,000. Click on any county circle for details.

Submit your email address below to receive weekly “RealtyTrac Roundup” email notifications of new content in the newsroom.