43 Percent of U.S. Homes with an Estimated Market Value of $6.6 Trillion in Counties with High Natural Disaster Risk 29 Percent of U.S. Homes Worth an Estimated $4.7 Trillion in High-Risk Hurricane Counties;
Home Prices Up 10 Percent in Last 10 Years in Lowest-Risk Areas, Down 6 Percent in Highest-Risk Areas

For the report RealtyTrac assigned a natural disaster risk score to 2,318 counties nationwide with sufficient home value data available. Based on its score, each county was assigned to one of five risk categories for overall risk of natural disaster: Very High, High, Moderate, Low and Very Low. Similar scoring and ranking was also used to rate risk for each of the five natural disasters individually (see full methodology below).

“In the interest of personal safety and protecting the value of what is likely their biggest financial asset, prospective buyers and investors should be aware of any natural disaster risk impacting a potential home purchase,” said Daren Blomquist, vice president at RealtyTrac. “There is no reason homebuyers need to be surprised with natural disaster risk information when wading through a stack of disclosures at the closing table given the widespread availability of this data online and even through mobile apps.

“In most cases learning about natural disaster risk will not stop a home sale, but it will help buyers make a better-informed decision about where to buy and also be prepared in terms of appropriate insurance coverage and family contingency plans depending on the type of natural disaster risks most affecting the home they end up purchasing,” Blomquist added.

“The weather is beautiful in SoCal, but we are statistically more susceptible to the risk of fire, floods and earthquakes than most areas. Our agents must be articulate in explaining the higher risks to buyers. People have to be able trust their agent to fully disclose the risks of natural disasters and homeownership to allow buyers to make the most informed decisions,” said Mark Hughes, chief operating officer with First Team Real Estate, covering the Southern California market. “A well-informed knowledgeable buyer is best prepared to take on the potential risks associated with SoCal homeownership.” 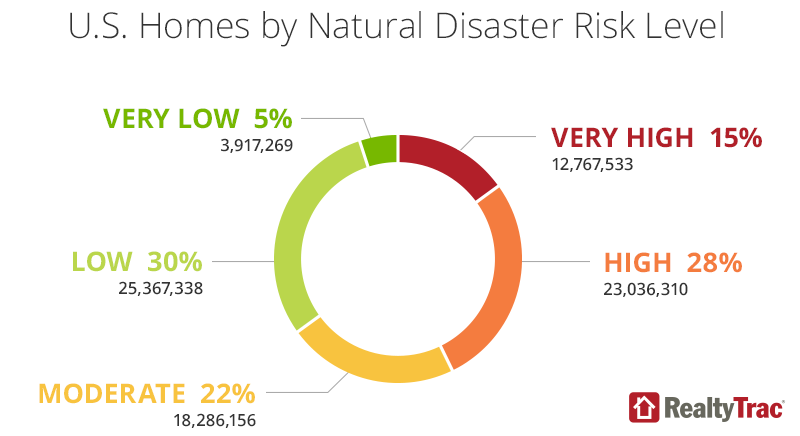 29 Percent of Homes Worth an Estimated $4.7 Trillion in Counties with High Hurricane Risk

The report found that 24.5 million single family homes and condos (29 percent of the 83.4 million total) with a combined estimated market value of $4.7 trillion are in counties with a High risk or Very High risk for hurricanes.

“The allure of South Florida’s sun and surf, for most, outweigh any concern of a hurricane threat,” said Mike Pappas, CEO and president of the Keyes Company covering the South Florida market. “The improved communication, continual education and enhanced predictability all give comfort to our coastal residents. History has shown that we are not only able to survive but in fact thrive with insurance and property improvements after a storm hits.” 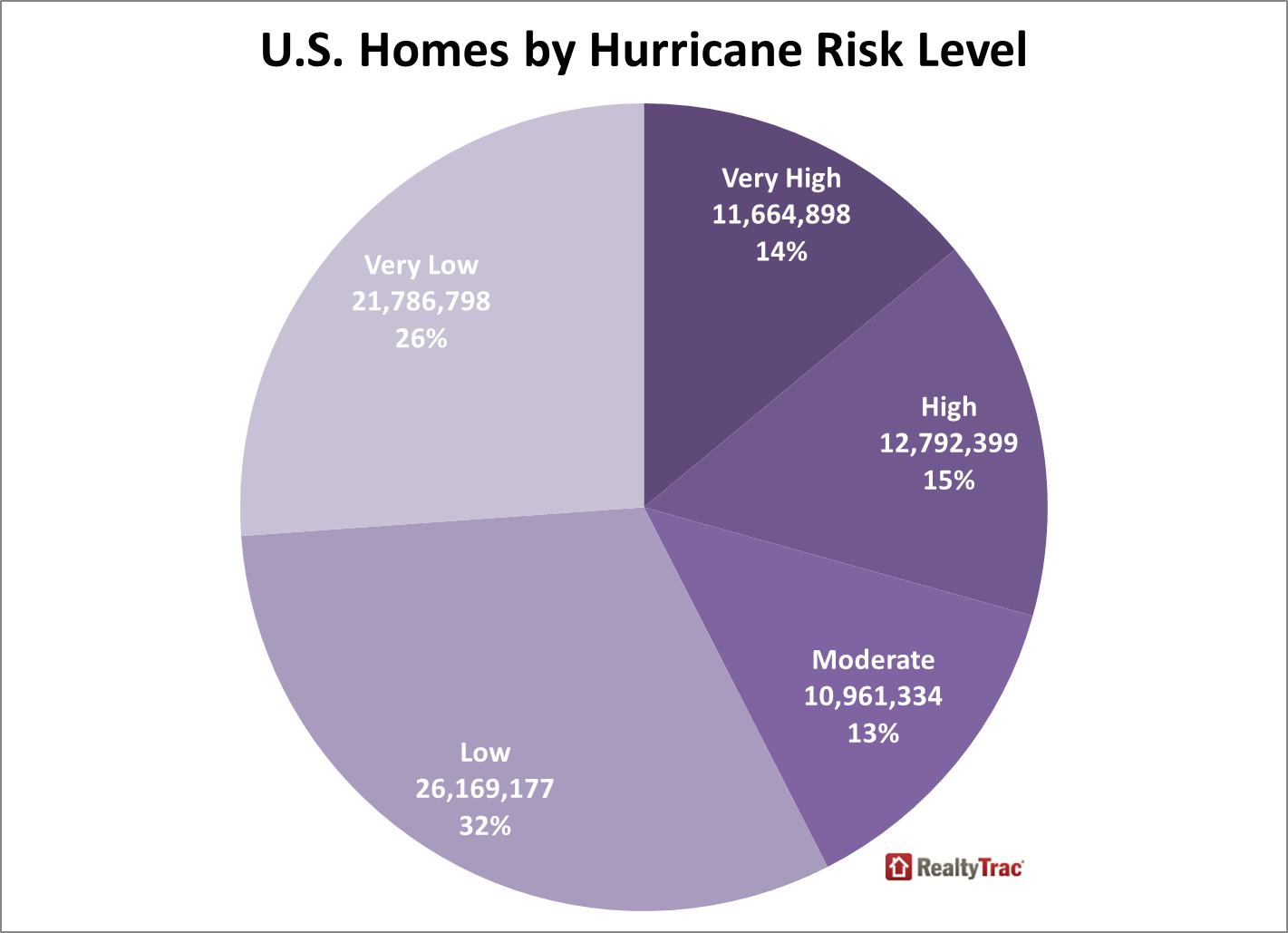 13 Percent of Homes Worth an Estimated $1.8 Trillion in Counties with High Wildfire Risk

The report found that 10.6 million single family homes and condos (13 percent of the 83.4 million total) with a combined estimated market value of $1.8 trillion are in counties with a High Risk or Very High risk for wildfires. 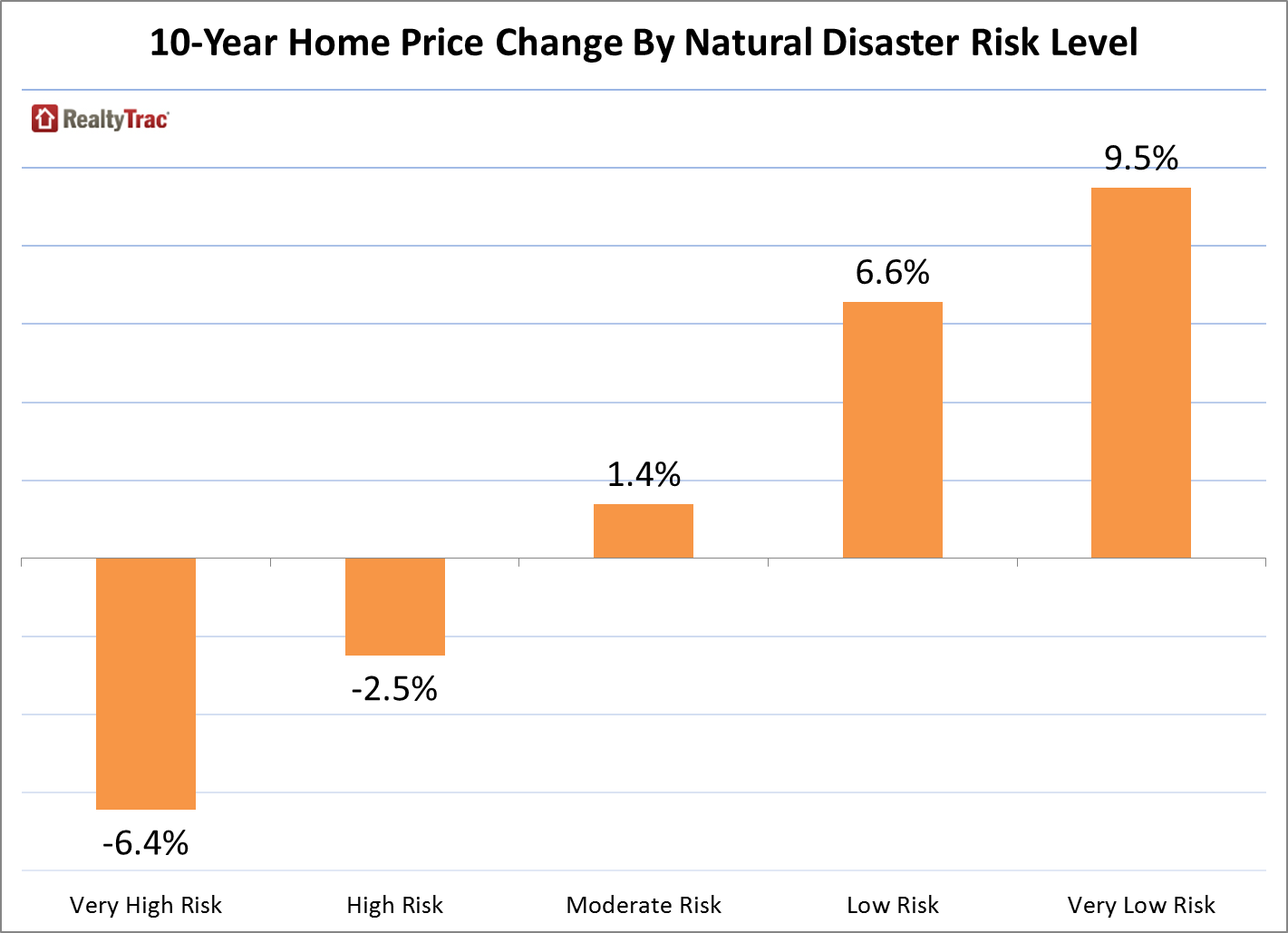 “Each year we experience damaging storms and it is with anticipation we recommend buyers make sure they have adequate insurance to protect them from carrying the burden of replacing a roof when the storms hit,” said Heidi Greer, owner/broker at RE/MAX Alliance, covering the Denver market in Colorado, which was one of six states with no counties rated High or Very High for overall natural disaster risk despite having some counties rated as High risk for wildfires and floods.  “Our mountain areas have a much higher risk of fire and there are regulations buyers must be made aware of when they purchase wooded properties or have the intent of adding structures in wooded locations.  Buyers who prefer the mountain areas are normally aware of the added risk before they consider moving there.”

“Across Ohio, amenities abound to assist in the mitigation of potential risk of natural hazards,” said Michael Mahon, president at HER Realtors, covering the Cincinnati, Dayton and Columbus markets in Ohio, where just one county was rated High for overall natural disaster risk despite the state having the seventh highest number of homes in counties rated High risk for tornados. “Given the risk of tornadoes some homebuyers are only interested in seeing homes with basements to mitigate the risk.”

Report methodology
In its second annual U.S. Natural Disaster Housing Risk Report, RealtyTrac analyzed five different natural disasters posing a risk to housing: earthquake risk, hurricane risk, tornado risk, flood risk and wildfire risk. Based on these five factors, each of the counties analyzed was assigned a combined natural disaster risk score from 0 to 300, with 300 representing the most risk (190 was the highest score among all the counties). Based on these scores, counties were assigned one of five different categories of risk of natural disaster: Very High Risk (Score of 90 or higher); High Risk (55 to 89 score); Moderate Risk (30 to 54 score); Low (15 to 29 score); and Very Low (0 to 14 score).

Detailed methodology for each individual natural disaster risk
The earthquake risk score is based on a predictive earthquake risk model created by the U.S. Geological Survey (USGS) that calculates the probability of a 5.0 magnitude earthquake occurring within a 30-mile radius over the next 50 years.

The hurricane risk score is based on historical hurricane activity data from 2001 to 2013 from the National Oceanic and Atmospheric Administration (NOAA) that ranks hurricane risk in each county on a scale from 0 to 456,668.

The tornado risk score is also derived from NOAA data from 2001 to 2013 that provides a Destruction Potential Index (DPI) for each county based on the number of tornados, path area of tornados in square miles and intensity of tornados using the Fujita scale of F0 to F5.

The flood risk score is based on flood zones defined by the Federal Emergency Management Agency. For this report, RealtyTrac analyzed the percentage of single family homes in each county that are in flood zones considered high risk by FEMA (A, A99, AE, AH, AO, V, and VE).

The wildfire risk is based on categories of Wildfire Disaster Potential (WHP) developed by the USDA Forest Service and Fire Modeling Institute. For this report, RealtyTrac analyzed the percentage of property parcels that are in areas defined as having “Very High” or “High” WHP.