Flipped Homes Fall to 4.5 Percent of All Single Family Sales in Q2 2015 Despite Increase in Average Flipping Returns IRVINE, Calif. – Aug. 6, 2015 — RealtyTrac® (www.realtytrac.com), the nation’s leading source for comprehensive housing data, today released its Q2 2015 U.S. Home Flipping Report, which shows that 30,013 single family homes were flipped — sold as part of an arms-length sale for the second time within a 12-month period — in the second quarter, 4.5 percent of all single family home sales during the quarter. 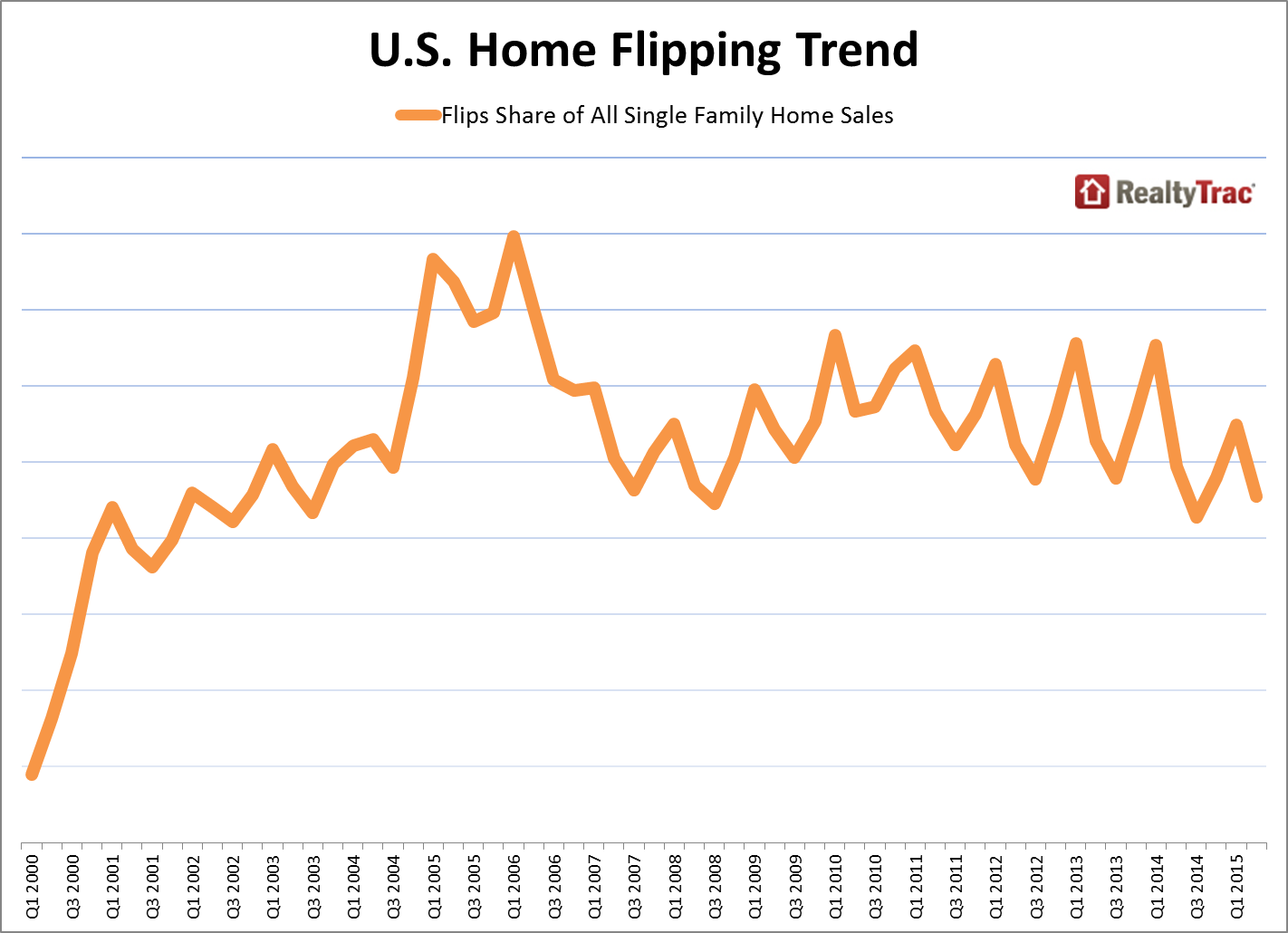 The average gross profit — the difference between the purchase price and the flipped price (not including rehab costs and other expenses incurred, which flipping experts estimate typically run between 20 percent and 33 percent of the property’s after repair value) — for completed flips in the second quarter was $70,696, up from $67,753 in the previous quarter and up from $49,842 a year ago. 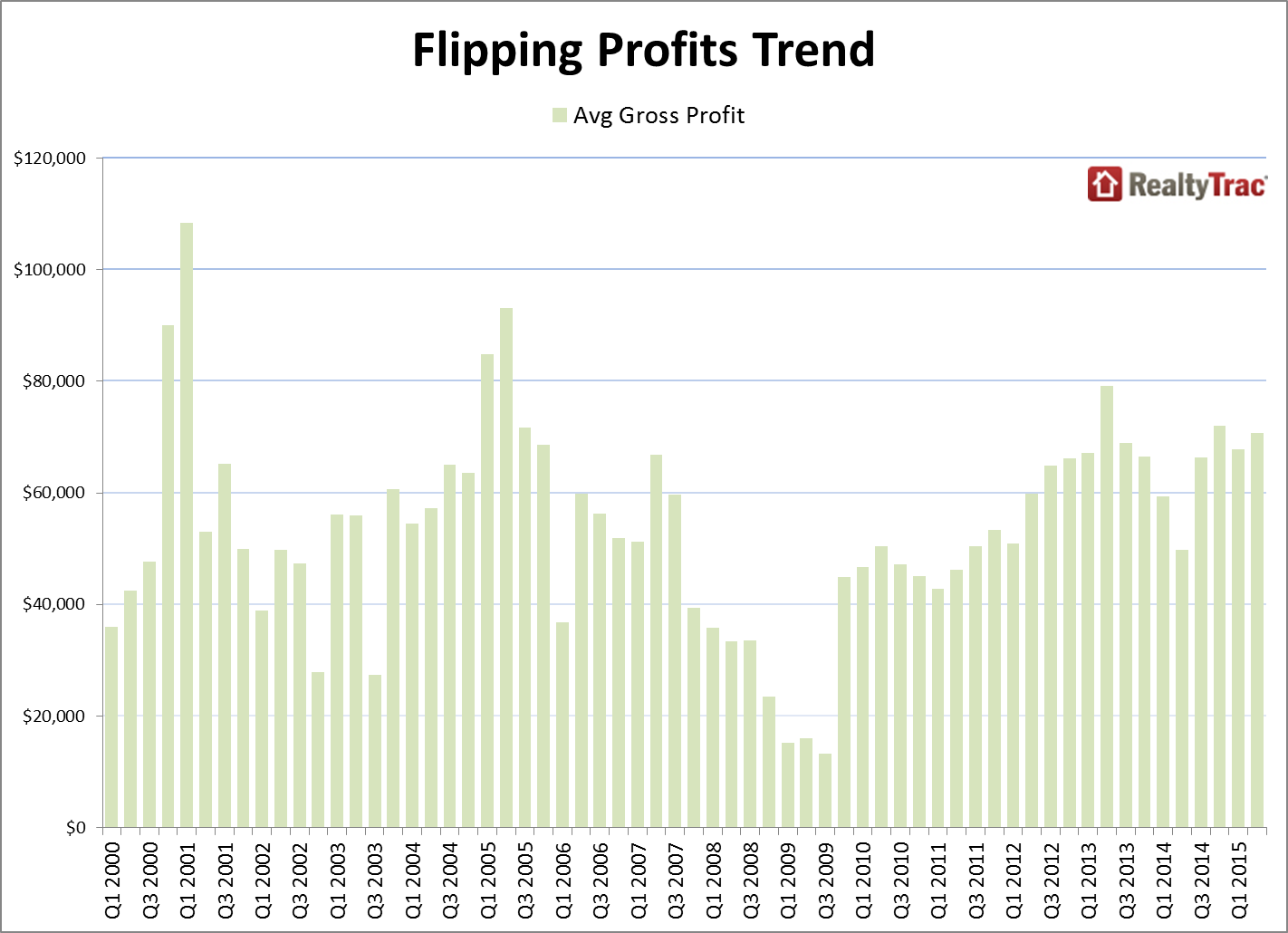 “Despite the rise in flipping returns in the second quarter, home flippers should proceed with caution in the next six to 12 months as home price appreciation slows and a possible interest rate increase could shrink the pool of prospective buyers for fix-and-flip homes,” said Daren Blomquist, vice president at RealtyTrac. “While average flipping returns are up substantially from a year ago at the national level and in moderately-priced markets such as Miami, Atlanta, Phoenix and Minneapolis, flipping returns are softening in some of the higher-priced markets such as San Francisco, Seattle, Denver and Los Angeles,”

“The fewer foreclosure deals and longer flipping timelines that we see in the data demonstrate that flippers are getting squeezed on both sides of the profit equation,” Blomquist continued. “Experienced flippers will often need to enter into higher-risk markets with less solid economic fundamentals to chase better yields. Flipping is not always profitable, as evidenced by the fact that flips on low-end homes priced below $50,000 actually yielded negative returns in the second quarter.”

“Even with our strong rise in prices, investors remain savvy and are enjoying continued success with increased profits per flipped home in South Florida,” said Mike Pappas, CEO and president of Keyes Company, covering the South Florida market. “They saw an 18 percent rise in gross profits over last year to an impressive $82,042 average increase in value with a 175-day hold. “Flipped homes are now under 10 percent of our overall market dropping 7 percent from last year. However, our long process of foreclosure due to our judicial state bodes well for the serious investor for the next few years.”

“Flips are still a relevant and interesting segment in our marketplace,” said Mark Hughes, chief operating officer with First Team Real Estate, covering the Southern California market. “Gross profits in dollars continue to rise with more efficient renovation technologies and work flows, and the uptick in market activity just adds fuel to the flip dynamic, too. One of the problems with a high-priced market like Southern California is that you can get into a multiple-offer situation making the acquisition price rise further. Most of the high-end flippers in our area are betting on up-and-coming neighborhoods where they don’t expect to make a profit for two to five years.”

“With low available inventory, increasing sales prices, and low days on market, communities across Ohio are offering greater profit opportunities for investors looking to flip real estate investment properties in 2015,” said Michael Mahon, president at HER Realtors, covering the Cincinnati, Dayton and Columbus markets in Ohio. “As competition has continued to increase with large Wall Street investment trusts and individual investors competing for the same inventory, the difficult task has been finding potential properties to invest.”

“Although there was a drop in flipping in the second quarter, the trend is still upward,” said Matthew Gardner, chief economist at Windermere Real Estate, covering the Seattle market. “Clearly, the market is still strong for renovators, which is actually not surprising given the remarkably low levels of inventory in the Seattle market. Demand is still well ahead of supply. Even with further anticipated price growth in the Seattle market, I still believe that there is enough upside potential for “flippers” to make the margins necessary for them to continue to buy.”

Average time to flip increases to 179 days, an eight-year high

Among markets with at least 50 completed home flips in the second quarter, those with the longest average time to flip were Hartford, Connecticut (225 days), Fayetteville, Arkansas (218 days), Greeley, Colorado (215 days), New York, New York (211 days), Little Rock, Arkansas (204 days) and Chicago, Illinois (204 days). The average time to complete a home flip increased in five of these six these metro areas compared to a year ago. The only exception was Chicago, where the average time to complete a flip a year ago was 204 days.

On the other end, markets where flips completed in the second quarter took the shortest on average were Memphis, Tennessee (134 days), Birmingham, Alabama (138 days), Detroit, Michigan (141 days), St. Louis, Missouri (142 days), and Fernley, Nevada (144 days). The average time to complete a flip increased from a year ago in Memphis, Tennessee, but decreased from a year ago in the other four markets with the shortest average time to flip.

Report methodology
RealtyTrac analyzed sales deed data and automated valuation data for this report. A single family home flip was any transaction that occurred in the second quarter where a previous sale on the same property had occurred within the last 12 months. Average gross profit was calculated by subtracting the average price for the first sale (purchase) from the average price of the second sale (flip). Average gross return on investment was calculated by dividing the average gross profit by the first sale (purchase) price.